As far as I’ve been able to assess, there’s really only 2 ways patients can know that their surgeon did a good job:

For the first, some complications simply cannot be avoided, even if they can be predicted. For example, 3% of people who get their tonsils out will bleed 1 week afterward. It’s a mathematic certainty, but what’s not certain is which 3% of the patients that will be.

Therefore, we really put forth every effort to make sure we do everything in our power to ensure the second. If the skin is damaged, it will scar. There’s no such thing as a scarless incision. However, there are ways to make scars quite minimal and that’s what I want to talk about. I will use a few examples from the web with attribution to make my point. I do not plan on talking about hypertrophic scars or keloids which are entirely separate topics altogether. However, I do want to mention a couple of simple key points

First, size has an impact on scars. 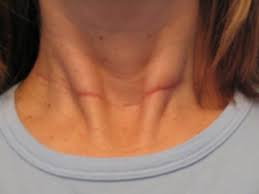 Some scars need to be lengthy, but some do not. I cannot comment on if this scar length is of appropriate size because I do not know how big her thyroid was. However, I can say that this is 3x the size of our typical thyroid incision. I do everything I can to get the scar to not cross over the sternocleidomastoid muscles (SCM) shown as the two vertical ridges above. The scar is going to be way more visible here than in between as you can quite easily see. We generally keep our thyroid incisions 3cm or smaller.

Second, placement. Scars should try to hide within natural wrinkles, but if they can’t, they should at least run in the same direction. Both scars above show that, but in the following, it does not and the prominence of the scar is quite readily apparent.

When an incision runs across the natural wrinkles, the scar will be more pronounced.

So there are clearly things that are important when planning scars. Here is one to show that even a long scar that goes vertically, when planned well, can be quite cosmetically acceptable. This was a scar from removing a tumor from the parotid gland. This first picture shows the scar result which is quite reasonable.

As important as surgical planning and technique is, after care is just as if not more important. The head and neck skin heals in a particular way that makes certain standards essentially universal. These are standards that you can use for almost any head and neck incision, unless directed otherwise. Nevertheless, always check with your surgeon before doing anything to an incision.

Not a bad scar, but it could be significantly less prominent had it not been exposed to the sun over the summer time. In fact, this scar would be very hard to see if it was the same color as the surrounding skin.

Many patients ask if they should keep the incision covered and when they can shower. Most of the time it’s safe to shower after 48hrs, but check with your doctor. Usually, it is not recommended to submerse the incision for at least a week, but, again, always check for your particular situation.

I usually do not like the incisions to be covered by anything other than ointment. The reason is that most incisions heal more effectively if open to the air rather than covered. There are exceptions, but the general rule is to uncover. More importantly than the very mild improvement in healing is that an uncovered incision allows for much more rapid detection of any concerns such as infection, swelling, hypertrophy, keloiding, poor healing, drainage, or other potential complications.

I’ve heard of lots of different things that people like to put on scars to make them smaller–lotions, creams, ointments, honey, oils, salts, even grease. The most common one I hear is vitamin ointments. While Vitamin A is tossed around as is Vitamin D, the favorite one out there is Vitamin E. Here’s a story from the NY Times about Vit E. I don’t recommend using it and don’t know any cosmetic surgeons or dermatologists who do.

If the scar you have is cosmetically unappealing, there are things we can do about it. There are many options available for treating a scar that’s not healing the way you would prefer. But rather than reading a blog post, see your surgeon, your dermatologist, or another medical professional to discuss those options rather than doing something that may not help, or worse, could potentially make it worse.